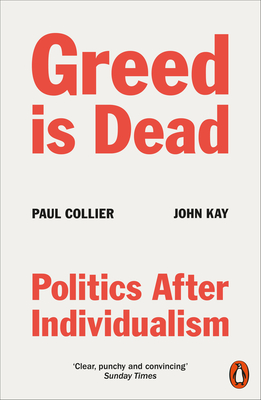 The idea that people are basically driven by individualism and economic incentives, and that prosperity and good societies come from top-down leadership, has dominated politics for the last thirty years (from some perspectives, much longer).

This book shows that the age of homo economicus and centralization is coming to an end. Instead, Collier and Kay argue that community and mutuality will be the drivers of successful societies in the future - as they are already in some parts of the world. They show how politics can reverse the move to extremes of right and left in recent years, that the center can hold, and that if we think differently we can find common ground to the benefit of all.
Paul Collier is the Professor of Economics and Public Policy at the Oxford Blavatnik School of Government. He is the author of The Future of Capitalism, which won the 2019 Handelsblatt Prize; The Bottom Billion, which won the Lionel Gelber Prize and Arthur Ross Prize of the Council on Foreign Relations; The Plundered Planet, Exodus and Refuge (with Alexander Betts). Collier has served as Director of the Research Department of the World Bank, and works with governments around the world.

John Kay is one of Britain's leading economists and a fellow of St John's College Oxford. His career has spanned academia, business, finance and public policy. He was the founding head of the Oxford Said Business School and the Institute for Fiscal Studies - Britain's most respected think tank. He is the author of The Truth About Markets, Obliquity, Other People's Money and other books and for twenty years contributed a regular column to the Financial Times.

"This thoughtful polemic... is clear, punchy and... convincing... their breezy, no-nonsense guide is packed with excellent advice - a plea for expertise rather than feeling, for pragmatism rather than ideology and for listening rather than shouting. -- Sunday Times

Two of the most thoughtful economists writing today ... Interesting on almost every topic they alight upon. —Literary Review

"Written by two of the UK's best economists, the book attacks the solipsistic individualism that permeates modern economics and far too much of modern society. The book's animating idea is that humans are first and foremost social animals. Our successes always depend on co-operation. The authors apply this concept to our economic, social and political institutions, which can, they argue, only be revived by being seen as self-sustaining communities. --Financial Times Books of the Year

Their analysis is pitiless and compelling. This is a fine, incisive polemic. --Telegraph

In a provocative but thought-provoking and nuanced argument, Collier and Kay argue that our culture of hyper-centralisation is choking us. -- Books of the Year ― Daily Telegraph
“An engaging and well-reasoned argument.” —Washington Poston The Future of Capitalism

“Collier mounts a compelling and often scathingly witty last-ditch defense, seeking not to combine the “best ideas” of Left and Right, but to fix the damage they’ve done.” — Vulture’s “Best New Books of December” on The Future of Capitalism

"Insightful and influential."--Newsweek on The Bottom Billion

"An acclaimed bestseller in 2007, and already a set text in development courses worldwide, Paul Collier's The Bottom Billion has far from exhausted its potential to change the way we think about, teach about, and legislate about global poverty..."--Ethics & International Affairs (publication of the Carnegie Council) on The Bottom Billion

"A path-breaking work providing penetrating insights into the largely unexplored borderland between economics and politics."--George Soros on The Bottom Billion

"Collier may have identified the next frontier for positive change."--Tyler Cowen, The New York Times on The Bottom Billion

"An elegant and careful guide to thinking about personal and social economics, especially in a time of uncertainty. The timing is impeccable." —New York Times Book Review on Radical Uncertainty

"In this profound yet practical book, Kay and King admit the obvious―that in crucial domains, we do not, will not, cannot know what is going on―and show, nevertheless, how to retain the ability to function." —Paul Romer, Nobel laureate on Radical Uncertainty

"Many books will make a reader better informed or smarter. This is one of very few that will make a reader much wiser. You will live differently and better after you grasp Kay and King’s seminal lessons about radical uncertainty." —Lawrence H. Summers, US Treasury Secretary 1999-2001, and Charles W. Eliot University Professor at Harvard University on Radical Uncertainty