The Penguin Book of Card Games: Everything You Need to Know to Play Over 250 Games (Paperback) 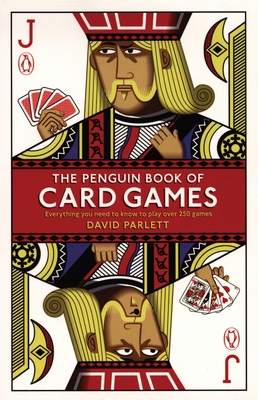 The Penguin Book of Card Games: Everything You Need to Know to Play Over 250 Games (Paperback)


Usually Ships in 3-7 Days
The Penguin Book of Card Games is the authoritative up-to-date compendium, describing an abundance of games to be played both for fun and by serious players. Auctions, trumpless hands, cross-ruffing and lurching: card players have a language all of their own. From games of high skill (Bridge) to games of high chance (Newmarket) to trick-taking (Whist) and banking (Pontoon), David Parlett, seasoned specialist in card games, takes us masterfully through the countless games to choose from. Not content to merely show us games with the conventional fifty-two card pack, Parlett covers many games played with other types of cards - are you brave enough to play with Tarot? With a 'working description' of each game, with the rules, variations and origins of each, as well as an appendix of games invented by the author himself, The Penguin Book of Card Games will delight, entertain and inform both the novice and the seasoned player.
David Parlett is a games inventor, consultant and author. He is a card games expert of international repute. A former language teacher then technical journalist, he has been freelancing in the games world since editing Games and Puzzles magazine in 1974. His many books include: The Guinness Book of Word Games (1995), A Dictionary of Card Games (1992) and The Penguin Book of Word Games (1982). He lives in South London.