Zero: The Biography of a Dangerous Idea (Paperback) 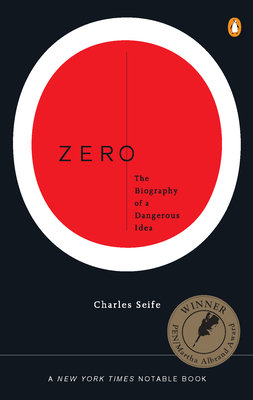 Popular math at its most entertaining and enlightening. "Zero is really something"-Washington Post

The Babylonians invented it, the Greeks banned it, the Hindus worshiped it, and the Church used it to fend off heretics. Now it threatens the foundations of modern physics. For centuries the power of zero savored of the demonic; once harnessed, it became the most important tool in mathematics. For zero, infinity's twin, is not like other numbers. It is both nothing and everything.

In Zero, Science Journalist Charles Seife follows this innocent-looking number from its birth as an Eastern philosophical concept to its struggle for acceptance in Europe, its rise and transcendence in the West, and its ever-present threat to modern physics. Here are the legendary thinkers—from Pythagoras to Newton to Heisenberg, from the Kabalists to today's astrophysicists—who have tried to understand it and whose clashes shook the foundations of philosophy, science, mathematics, and religion. Zero has pitted East against West and faith against reason, and its intransigence persists in the dark core of a black hole and the brilliant flash of the Big Bang. Today, zero lies at the heart of one of the biggest scientific controversies of all time: the quest for a theory of everything.

Charles Seife is the author of five previous books, including Proofiness and Virtual Unreality. He has written for a wide variety of publications, including The New York Times, Wired, New Scientist, Science, Scientific American, and The Economist. He is a professor of journalism at New York University and lives in New York City.

“Mathematicians, contrary to popular misconception, are often the most lucid of writers (Bertrand Russell won a Nobel Prize not in mathematics but in literature), and Seife is a welcome example. He writes with an understated charm that takes account of human fear, the mistakes of geniuses and the mind’s grandest ambitions.”
—Atlanta Journal Constitution

“Zero emerges as a daunting intellectual riddle in this fascinating chronicle. With remarkable economy, Seife urges his readers to peer through the zero down into the abyss of absolute emptiness and out into the infinite expanse of space. . . . Deftly and surely, Seife recounts the historical debates, then swiftly rolls the zero right up to the present day, where he plunges through its perilous opening down into the voracious maw of a black hole, and then out into the deep freeze of an ever cooling cosmos. A must read for every armchair physicist.”
—Booklist (starred review)

“His narrative . . . shifts smoothly from history and philosophy to science and technology, and his prose displays a gift for making complex ideas clear.”
—The Dallas Morning News

“Seife keeps the tone as light as his subject matter is deep. By book’s end, no reader will dispute Seife’s claim that zero is among the most fertile—and therefore most dangerous—ideas that humanity has devised. . . . Seife’s prose provides readers who struggled through math and science courses a clear window for seeing both the powerful techniques of calculus and the conundrums of modern physics. . . . In doing so . . . this entertaining and enlightening book reveals one of the roots of humanity’s deepest uncertainties and greatest insights.”
—Publishers Weekly (starred review)

“The greater part of this book tells a fascinating human story with skill and wit . . . we come to appreciate the surprising depth and richness of ‘simple’ concepts such as zero and infinity—and their remarkable links to the religion and culture of earlier civilizations and to present-day science.”
—The Philadelphia Inquirer

“Seife . . . recounts his story as an accomplished science journalist, standing on the outside to bring clarity to complex ideas. . . . the crisp explanations are refreshing . . . straightforward and bright.”
—The New York Times

“Seife has a talent for making the most ball-busting of modern theories . . . seem fairly lucid and common sensical.”
—Salon