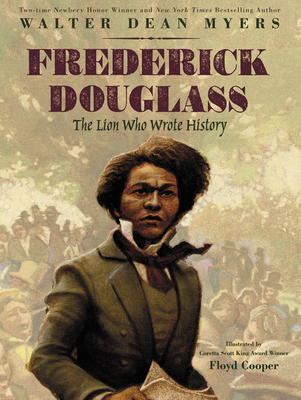 Frederick Douglass was born into slavery in the South, taught himself to read, and grew up to become an icon. He was a leader of the abolitionist movement, a celebrated writer, an esteemed speaker, and a social reformer, proving that “once you learn to read, you will be forever free.”

The story of one of America’s most revered figures is brought to life by the text of award-winning author Walter Dean Myers and the sweeping, lush illustrations of artist Floyd Cooper. This picture book biography draws on Frederick Douglass’s autobiographies and includes a timeline, making it an excellent source for reports.

"A stirring testament to the power of words and daring action to create change” (Publishers Weekly starred review).

Walter Dean Myers was the New York Times bestselling author of Monster, the winner of the first Michael L. Printz Award; a former National Ambassador for Young People's Literature; and an inaugural NYC Literary Honoree. Myers received every single major award in the field of children's literature. He was the author of two Newbery Honor Books and six Coretta Scott King Awardees. He was the recipient of the Margaret A. Edwards Award for lifetime achievement in writing for young adults, a three-time National Book Award Finalist, as well as the first-ever recipient of the Coretta Scott King-Virginia Hamilton Award for Lifetime Achievement.

Floyd Cooper received a Coretta Scott King Award for his illustrations in The Blacker the Berry and a Coretta Scott King Honor for Brown Honey in Broomwheat Tea and I Have Heard of a Land. Born and raised in Tulsa, Oklahoma, Mr. Cooper received a degree in fine arts from the University of Oklahoma and, after graduating, worked as an artist for a major greeting card company. His many beloved books form a lasting legacy.

“Young readers will certainly come away with an understanding of how one person, in spite of overwhelming odds, can make a difference. Cooper’s signature style brilliantly sings in clear and resounding volumes across every page....A posthumous title of distinction from [Myers].”
— Kirkus Reviews

“This picture book biography draws on Frederick Douglass’s autobiographies to examine his motivations and his lasting impact on U.S. history....The events covered are well chosen to give young readers insight into the essence of his life and accomplishments. Recommended for collections looking to further explore Douglass’s legacy.”
— School Library Journal (starred review)

“[A] stirring testament to the power of words and daring action to create change.”
— Publishers Weekly (starred review)