You're Invited: The Art and Science of Connection, Trust, and Belonging (Hardcover) 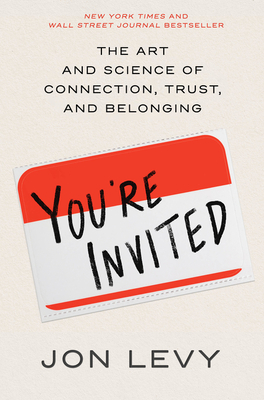 You're Invited: The Art and Science of Connection, Trust, and Belonging (Hardcover)

Regardless of what you want to accomplish, from growing your business, creating a great company culture, championing a social cause, or affecting your habits, you can’t do it alone. The people around you define your success (whatever that means for you) and they have the potential to change the course of your life.

That’s what You’re Invited is about: The most universal strategy for success is creating meaningful connections with those who can impact you, your life, and the things you care about. But how do you make those connections and build trust quickly? What do you do if you’re introverted or hate networking?

Behavioral scientist Jon Levy had no money, reputation or status, but was able to convince groups of Nobel Laureates, Olympians, celebrities, Fortune 500 executives, and even an occasional princess to not only give him advice, but cook him dinner, wash his dishes, sweep his floors, and then thank him for the experience. The goal of his gatherings, much like this book, was not networking, but to build meaningful and lasting relationships.

This private community based around the dinner experience became known as “The Influencers”, named for the member’s success and industry influence. Since its inception more than a decade ago, The Influencers has grown into the largest private group of its kind worldwide, with a thriving community both in person and through digital experiences.

In You’re Invited, Levy guides readers through the art and science of creating deep and meaningful connections with anyone, regardless of their stature or celebrity, and demonstrates how we develop influence, gain trust, and build community so that we can impact our communities and achieve what’s important to us.

Jon Levy is a behavioral scientist best known for his work in influence, human connection, and decision-making. He specializes in applying the latest research to transform the ways companies approach marketing, sales, consumer engagement, and culture. His clients range from Fortune 500 brands to startups.

More than a decade ago, Jon founded The Influencers Dinner, a secret dining experience for industry leaders, from Nobel laureates, Olympians, celebrities, and executives to artists, musicians, and the Grammy-winning voice of the bark from “Who Let the Dogs Out.” Guests cook dinner together but can’t discuss their careers or give their last names. Once seated to eat, they reveal who they are. Over time, these dinners developed into a community. With thousands of members, The Influencers is the largest community of its type worldwide.

In his free time, Jon works on outrageous projects, among them spending a year traveling to all seven continents and attending the world’s greatest events (Grand Prix, Art Basel, Burning Man, Running of the Bulls, etc.), barely surviving to tell the tale. These adventures were chronicled in his first book, The 2 AM Principle: Discover the Science of Adventure.

“I know firsthand that Jon Levy understands a lot about human behavior---he got me and a bunch of other busy professionals to cook him dinner. From his research and long experience, Jon is a master of building connections between people and enriching their lives in the process. This book explains, simply and engagingly, how he does it." — Eric Maskin, Nobel laureate and economist

"I had no idea what to expect as I walked into a strangers house with a bottle of wine. The beauty of the experience was in the simplicity of it all. It wasn't extravagant or pretentious, instead it was a group of strangers cooking together. By the end we were all chatting like old friends. That's what this book illustrates so beautifully, life is about the people we surround ourselves with. Now I am borderline obsessed with the connections I have in my own life along with the connections in others' lives that led them to where they are today."  — Nathan Adrian, 8 Time Olympic Medalist, Team USA

“Normally when a strange man invites me to dinner, I decline. But I, like all of my dinner mates that evening, was inspired by Jon's unslakable curiosity about humans and how we form bonds. It is in the pursuit of those answers that Jon is able to set the table scientifically, mentally and, of course, literally, for strangers to engage in thoughtful, meaningful and life altering conversations. Explained in these pages are the how and why connecting with fascinating strangers is so important. This book is as close as one can get to actually attending one of his extraordinary dinners.”
— Iliza Shlesinger, comedian

“I grew up in a close community of cousins who built my confidence through love, humor and food. As an adult, I wasn’t pleased that twenty seven Greeks couldn’t come with me to Hollywood events and laugh at my jokes. Isolation is no fun. Making burritos at an Influencer’s dinner is. This book will make you as confident and good looking as your mother says you are.” — Nia Vardalos, actress and star of My Big Fat Greek Wedding

"Jon and his dinners are focused on bringing people together under the umbrella of unique experiences to share a love of life and the spirit of connection." — Jesse Carmichael, Maroon 5 guitarist