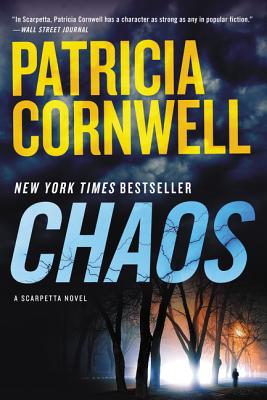 This is book number 24 in the Kay Scarpetta series.

“When it comes to the forensic sciences, nobody can touch Cornwell.”

A vast chasm or void. Anarchy. The science of unpredictability.

On a late summer evening in Cambridge, Massachusetts, Dr. Kay Scarpetta and her investigative partner, Pete Marino, respond to a call about a dead bicyclist near the Kennedy School of Government. It appears that a young woman has been attacked with almost superhuman force.

Even before Scarpetta’s headquarters has been officially notified about the case, Marino and Scarpetta’s FBI agent husband, Benton Wesley, receive suspicious calls, allegedly from someone at Interpol. But it makes no sense. Why would the elite international police agency know about the case or be interested? It soon becomes apparent that an onslaught of harassment might be the work of an anonymous cyberbully named Tailend Charlie, who has been sending cryptic communications to Scarpetta for over a week.

Even Lucy, her brilliant tech-savvy niece, can’t trace who it is or how this person could have access to intimate information. When a second death shocks Scarpetta to her core, it becomes apparent she and those close to her are confronted with something far bigger and more dangerous than they’d ever imagined.

Patricia Cornwell is recognized as one of the world’s top bestselling crime authors with novels translated into thirty-six languages in more than 120 countries. Her novels have won numerous prestigious awards including the Edgar, the Creasey, the Anthony, the Macavity, and the Prix du Roman d’Aventure. Beyond the Scarpetta series, Patricia has written a definitive book about Jack the Ripper, a biography, and three more fiction series among others. Cornwell, a licensed helicopter pilot and scuba diver, actively researches the forensic technologies that inform her work. She was born in Miami, grew up in Montreat, North Carolina, and now lives and works in Boston.

Praise for Chaos: “Thrilling…. Readers new to Cornwell will find themselves involved from the very first page, as will the veterans. Chaos is one book you should not miss.” — Bookreporter.com

“Patricia Cornwell has created characters with real emotions and life experiences, and she provides them with more than enough danger to make things interesting. Dr. Scarpetta has become a good friend.” — MysteryPlayground.net on Chaos

“[An] absorbing thriller.” — Blackfive.net on Chaos

“There is a quiet intensity to Ms. Cornwell’s writing that compels you to read, then the eeriness sets in. . . . With CHAOS, once again Patricia Cornwell mesmerizes with her astounding scientific knowledge, her keen ear for dialogue and the human psyche, all woven together flawlessly.” — FreshFiction.com on Chaos

“While Scarpetta’s character has flaws, she is still a powerful female protagonist and she offers the reader an amazing calculating approach to investigation. I am always amazed at the passion that she has for her position. . . . A fast engaging read.” — Dad of Divas Reviews on Chaos