Inventing Freedom: How the English-Speaking Peoples Made the Modern World (Hardcover) 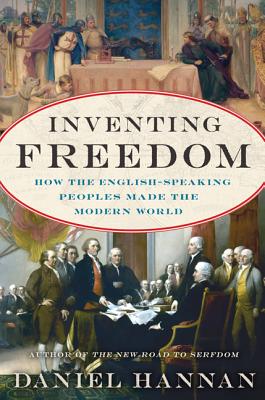 British politician Daniel Hannan's Inventing Freedom is an ambitious account of the historical origin and spread of the principles that have made America great, and their role in creating a sphere of economic and political liberty that is as crucial as it is imperiled.

According to Hannan, the ideas and institutions we consider essential to maintaining and preserving our freedoms—individual rights, private property, the rule of law, and the institutions of representative government—are the legacy of a very specific tradition that was born in England and that we Americans, along with other former British colonies, inherited.

By the tenth century, England was a nation-state whose people were already starting to define themselves with reference to inherited common-law rights. The story of liberty is the story of how that model triumphed. How it was enshrined in a series of landmark victories—the Magna Carta, the English Civil War, the Glorious Revolution, the U.S. Constitution—and how it came to defeat every international rival.

Today we see those ideas abandoned and scorned in the places where they once went unchallenged. Inventing Freedom is a chronicle of the success of Anglosphere exceptionalism. And it is offered at a time that may turn out to be the end of the age of political freedom.

Daniel Hannan is a writer and politician. He contributes to several newspapers, including the Wall Street Journal and the London Daily Telegraph. A former president of the Oxford University Conservative Association, he was elected to the European Parliament in 1999, at the age of 27, and has been twice reelected.

“With the eloquence of Macaulay or Trevelyan—both of whom are liberally quoted here—Hannan sweeps us through English history to show the triumph of law-based liberty and “that total understanding which can only exist between people speaking the same tongue.”
— The Telegraph (UK)

“Equal parts history and political theory, Inventing Freedom is a thought-provoking and stirring read for the holidays.”
— The Blaze