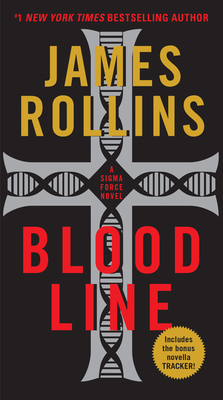 This is book number 7 in the Sigma Force Novels series.

Bloodline, a breathtaking Sigma Force thriller from the phenomenal James Rollins, is further proof that, when it comes to explosive adventure and nail-biting suspense, this New York Times bestselling author is one of the very best in the business! Bloodline is a lightning-paced, unputdownable international thriller chock-full of the trademark elements that have propelled Rollins to the top of virtually every national bestseller list: cutting-edge science ingeniously blending with history and nonstop action. A relentlessly exciting tale that races across the globe, Bloodline ensnares popular series hero Commander Gray Pierce in a deadly conspiracy involving Somali pirates, the kidnapped daughter of the U.S. Vice President, and a dark secret hiding in the human genetic code. This is mystery, suspense, surprise, and ingeniously inventive storytelling as only James Rollins can do it.

“James Rollins is a master of international action and intrigue.” — Richmond Times-Dispatch

“Rollins combines real-world science with high-octane action to create rousing stories of adventure that are as exciting as any movie.” — Chicago Sun-Times

“From the hidden Indian treasure, to the Fort Knox secrets, to the conspiracy at the beginning of the United States The Devil Colony gives you every reason why you’ll want to be a member of Sigma Force.” — Brad Meltzer, New York Times bestselling author of The Inner Circle on The Devil Colony

“Riveting....Rollins gets better with each book, and his position at the top of this particular subgenre remains unshaken.” — Publishers Weekly on The Devil Colony