Memo to the President: How We Can Restore America's Reputation and Leadership (Paperback) 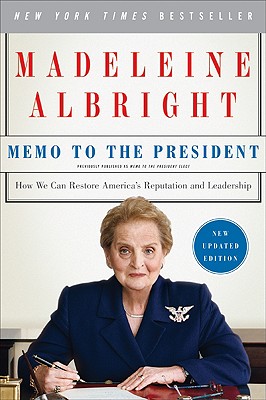 The next president will face the daunting task of repairing America's core relationships and tarnished credibility after the damage caused during the past eight years. In Memo to the President, former secretary of state Madeleine Albright offers provocative ideas about how to confront the myriad challenges awaiting our newly elected commander-in-chief. Secretary Albright's advice is candid and seasoned with humor and stories from her years in office, blending lessons from the past with forward-looking suggestions about how to make full use of presidential power without repeating the excesses of the Bush administration and how to revive America's commitment to its founding ideals.

Madeleine Albright served as America’s sixty-fourth secretary of state from 1997 to 2001.  Her distinguished career also in-cludes positions at the White House, on Capitol Hill, and as U.S. ambassador to the United Nations.  She is a resident of Washington D.C., and Virginia.