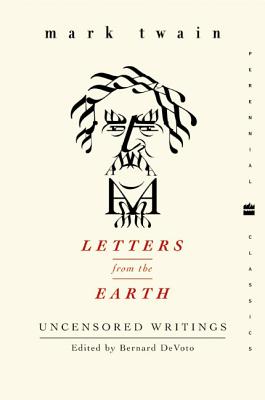 “The most impressive contribution to books by Mark Twain since The Mysterious Stranger of 1916...The attitude is that of Swift, the intellectual contempt is that of Voltaire, and the imagination is that of one of the great masters of American writing.”—New York Times Book Review

Virtually none of the material in Letters from the Earth was published in Twain’s lifetime and the manuscript was only approved by his executors in 1962. This is vintage Twain—sharp, witty, imaginative, wildly funny. His voice is as vigorous and blistering as ever, capable of surprising truth and provoking laughter in the most unlikely places.

In this collection, he presents himself as the Father of History, reviewing and interpreting events from the garden of Eden through the Fall and the Flood, translating the papers of Adam and his descendants down through the generations. There are comments on James Fenimore Cooper, English architecture, and the civilization of the French, as well as proposals for a simplified alphabet and a parody of books on etiquette. Letters from the Earth an exuberantly eclectic collection.

Mark Twain, who was born Samuel L. Clemens in Missouri in 1835, wrote some of the most enduring works of literature in the English language, including The Adventures of Tom Sawyer and The Adventures of Huckleberry Finn. Personal Recollections of Joan of Arc was his last completed book—and, by his own estimate, his best. Its acquisition by Harper & Brothers allowed Twain to stave off bankruptcy. He died in 1910.

“The most impressive contribution to books by Mark Twain since The Mysterious Stranger of 1916...The attitude is that of Swift, the intellectual contempt is that of Voltaire, and the imagination is that of one of the great masters of American writing.”
— Howard Mumford Jones, New York Times Book Review

“Twain at his best. The high point of the book is the title section, which presents a series of letters supposedly written by Satan, reporting on a visit to the ‘Human-Race experiment....Here Twain takes some of man’s most revered beliefs and demonstrates their downright preposterousness when examined in a cold light. He is iconoclastic, and not gentle in his idol breaking. But reading the letters should be stimulating to anyone interested in looking at the world around him objectively and a delightful experience to anyone with a sense of humor.”
— Chicago Sunday Tribune

“Twain sentimentalists will gasp, Bible-belters will turn purple, austere stylistic purists will raise eyebrows--but dyied-in-the-wool Twain enthusiasts will grab hungrily for what amounts to a new volume by the ‘Lincoln of our literature.’...The pages in this volume range from furious to funny, from deadly earnestness to frothy word-play.”
— Library Journal